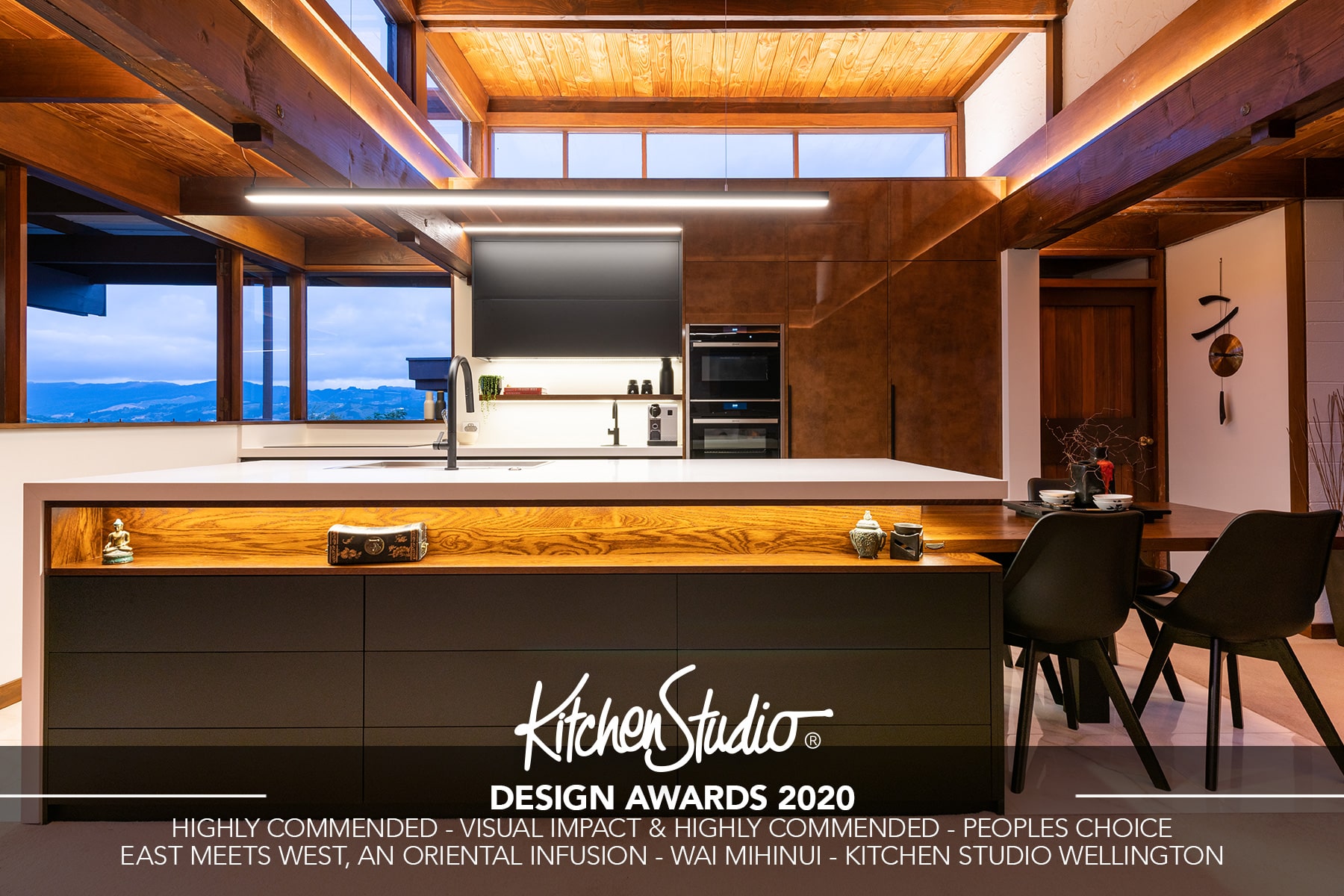 An award-winning architecturally designed home known for its uses of Feng Shui methodologies called for a uniquely light-handed approach for the new kitchen design. It was imperative to create a sleek modern design that nestled into the existing architecture all while creating visual impact. The old kitchen layout was dated and a traditional G shape, it called for something more modern and streamlined that would align with the client’s modern fast-paced lifestyle. The most used and love space in their home was an outside covered area and an existing kitchen wall put a physical block between the two spaces, once removed, it opened up the options to create the now, Oriental-inspired modern kitchen layout and design that plays on the textures offered up by the building that houses it.

Key Client Requirements:
Create a design that is modern and clean-lined but doesn’t fight with the existing architecture, instead, complementing it.
Allows for better flow between the two outside deck areas that hug the kitchen space.
The aesthetics of the kitchen nod to the Oriental worlds.

Design Solutions:
By removing an existing kitchen wall it opened up the floor plan and space for a large back wall & island design. This allowed more light, connection and flow between the two outside areas.
The large ‘cubby hole’ wall unit design was inspired by the displays you might find in an Asian restaurant or hospitality space. The Aventos HF wall lift up was selected so that the wall unit could be left open, freeing the inhabitants from a possible head injury. The decision to fabricate out of Melteca Acrylic Soft Touch meant that aesthetics were enhanced when left open.
Timber accents and the dining table design meant we could get a dining area, large kitchen and informal seating area into the available space without compromising flow and aesthetics. The stained timber linked the new design to the architecture.
Luxe Cuzco Copper was selected to bring the kitchen design into the modern realm with the hi-gloss finish, and yet it nestles into the existing architecture with the gentlest of touch. The Matt black cabinetry creates a bold contrast statement that complements all of the rich tones the design offers.
Space-saving storage solutions, such as the Blum Spacetower pantry & Blum Tandembox Antaro Tip-ON toe kick drawers offered additional storage for the client, as other accessories like the Sirius induction hob with rear riser and Zenith Tap took up much-needed storage space under the bench.